skip to main | skip to sidebar

On April 20, 2013, I taught an Introduction to Art Quilting workshop at the Bonshaw Community Centre on the Green Road in Bonshaw, PEI.  My eleven students for the day enjoyed painting on fabric, cutting and fusing, stamping, beading and hand-stitching their creations.  This is the first of many workshops, thanks to a grant from the South Shore Arts Council.

Here are some highlights from the day's class, courtesy of Diana Lariviere, our local marriage commissioner and my long-time friend.  (The author, Diana Lariviere, retains all copyright to the photos posted below, and they are used with permission of the author.)

We all learned something new, met new friends and old, and spent a pleasant day stitching together on a cold, spring weekend. 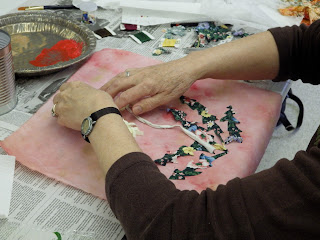 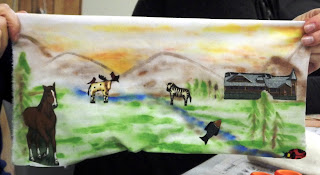 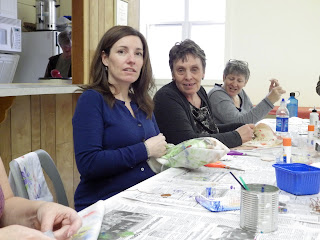 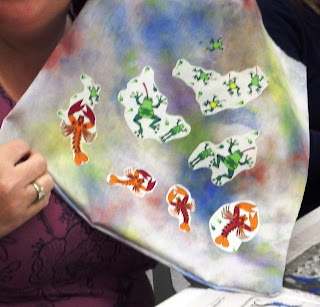 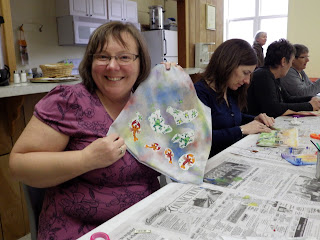 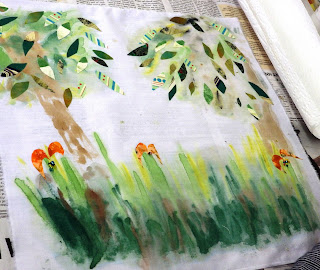 Posted by Sharon Sawyer at 12:16 PM No comments:

On April 20, 2013, between 1-4, I'll be giving a workshop on beginning art quilting, sponsored by the South Shore Arts Council at the Bonshaw Hall.  Cost is $20 per person, including materials.  Everyone who comes will get a kit containing scissors, batting, un-bleached cotton muslin, colourful scraps of fabric, beads and small embellishments, fusible webbing, a Sharpie, a sewing needle, pins and coordinating thread.  Fabric medium, acrylic paint, brushes, stamps, iron, ironing board, and other items will be available for using that day.

Plan to come for lots of fun.  See your friends and neighbors, meet new people and enjoy the day. 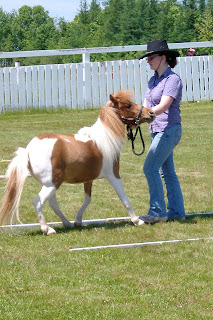 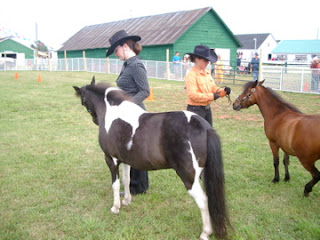 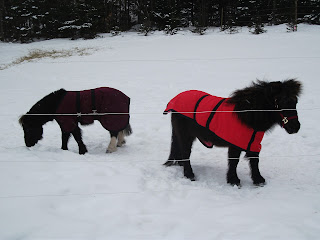 Posted by Sharon Sawyer at 8:17 AM No comments:

Abby and the Little Horses: A Canadian Fairy Tale


Abby has a miniature horse named Willy that she bought nearly three years ago, once we settled here in Prince Edward Island.

Once Upon A Time, there was a little girl named Abby.  Since she was a very little girl, she had always wanted a horse.  Every year, when she awoke on her birthday or on Christmas morning, she would get up early, look out her bedroom window in Lowell and be disappointed.  There was no horse tied to a tree waiting for her to jump on it's back.  The fact that we lived in the city and our postage stamp of a yard was nearly the size of our house mattered not.  Abby wanted a horse.

She was a determined little girl, though, and when our friend Harvey in PEI got some miniature horses, Abby went in search of someone close by who might own such magical creatures.  She found a kindred spirit in her friend Diane, owner of two mini horses, who let eleven-year-old Abby groom, feed and exercise her horses several times a week.  Of course, since Abby was eleven, I drove her to Diane's house and helped Abby with the walking and horse chores.  After a year or so, Diane started to bring Abby along for horse therapy visits to nursing homes and rehab centers.  Abby loved doing this, and really enjoyed interacting with the elderly and disabled people who had been looking forward to their visit.  Diane was a great friend to Abby and Abby studied every aspect of horse care in great detail.  During this time, Abby also took riding lessons in English and Saddle seat to get lots of experience with big horses.

I told Abby when she was little that someday we might move to Prince Edward Island, and when we did, she could have a horse.  Abby was determined to make this dream come true.  We did move to Prince Edward Island, and within a year, Abby had her horse.  Harvey agreed to trailer Abby's new horse from Tiz A Miniature Horse Farm in New Hampshire to PEI.  So one fine weekend, Harvey, Dave, Abby and I took a trip south.  We came back home, horse and all, in a hurricane.  Abby boarded Willy (whose real name is "Tiz Braveheart") with Harvey in exchange for working with his minis.  She did well.  Abby, Monty, Buttercup and Cheyenne won many ribbons, and even won Reserve Champion at Old Home Week in Charlottetown!

Willy lived at Harvey's for a long time, along with Pepper, Buttercup, Cheyenne and Monty.  Willy now lives with us at our new house, in his own little barn with his friend Pepper for company.  Pepper belongs to Evelyn, Harvey's wife.  She kindly offered to let Pepper visit for an indefinite time to be a companion horse to Willy, who was looking very lonely without his friends.  Pepper and Willy spend their days playing in the snow together and sleeping side-by-side in the front yard.  Abby looks out her bedroom window every day and sees her very own horse.  Just like she always dreamed she would.  And they all lived happily every after.
Posted by Sharon Sawyer at 8:08 AM No comments: 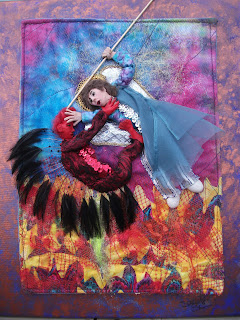 
This is the latest "St. Michael and Lucifer", promised in an earlier post.  It's smaller than the first St. Michael, but uses some of the same material as the first.  Like my other quilts in the series, this one is hand-sculpted from polymer clay, the hair is alpaca, the cloth is a mix of hand-dyed and commercial, and the piece is embellished with silk cocoons, feathers and sequins.

Since I made this quilt, we have bought a house, though not the one we were living in.  The new house is light and airy, five years old, small enough to be energy-efficient, but big enough for our needs.  It sits on about an acre of cleared land in the middle of five acres of birch and spruce forest, and there's a brook that borders it.  We share it with our two mini horses, two rabbits, four cats and wildlife.  We've seen rabbit tracks in the woods, red and silver foxes, lots of crows, and a bald eagle that likes to sit in the big birch tree in the backyard.  We have no visible neighbors, and our nearest neighbor is about half a kilometer away.  It's very peaceful and quiet here.  We love this place.  We love the Island, and the people who live here.  We'll be staying.

Posted by Sharon Sawyer at 10:32 AM No comments: 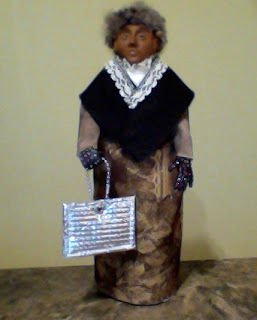 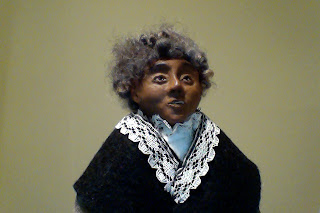 My latest little work of art is called "Amelia" the art doll.  She's a one of a kind sculpture, made from a weighted water bottle, trim and fabric scraps.  Her hair is merino wool, and her face and hands are hand-sculpted polymer clay.  She's completely hand-crafted and hand-stitched.  My wonderful brother-in-law is a dentist, and for Christmas he gave me dental tools to help me work on the finest details of my small sculptures and art quilts.  This doll's armature is a half-litre water bottle, so you can see how comparatively small the facial sculpting is.  I had been sculpting with a pin head, and dental tools make the work so much easier!  When I started working on her, I had no idea she would look like this.  The original idea I had was completely different.  Once I began working on her, her "personality" came alive, and it became very clear that her name should be Amelia.

Posted by Sharon Sawyer at 5:15 PM No comments:

Latest Work in the Series 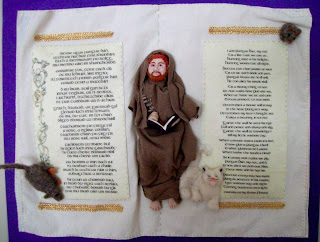 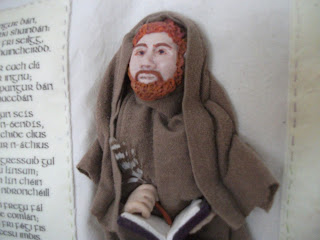 These photos are of my art quilt called "Pangur Ban."  Pangur Ban means white cat in the Irish language, and the name comes from a little poem inscribed in a margin of the ancient Book of Kells.  The Book of Kells was an illuminated manuscript of the Holy Bible, created during the middle ages in Ireland.  The poem tells the story of the relationship between the monk and his little white cat as they pass the hours together--the monk at his work, illustrating the stories of the Bible, and the cat at his work, catching mice.  My eldest daughter was studying in Ireland at the time and told me about the poem.  I researched it, printed it out in Irish and English, and attached the words to the "book" on linen.  The cat and mice are felted wool, the monk is made of polymer clay and hand-stitched fabric. 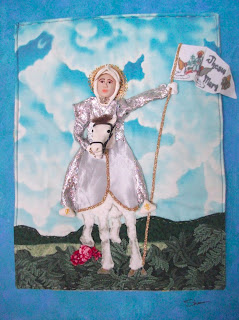 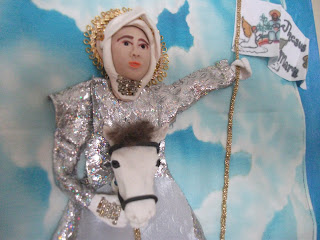 This piece is called "Jeanne d'Arc" or, translated, "Joan of Arc."  Both she and her horse are hand-sculpted of polymer clay with added beads.  Her armour is silver ribbon, sculpted into shape with lots of hand-stitching.  Her banner is historically accurate, as far as anyone on the internet has been able to determine, since there are written historical accounts of what her banner looked like, but of course, no one could take a photo in the middle ages, and no drawings of her banner survive.  She is shown here, victorious against the English invaders of France.  She's one of my favourite saints, and is well-known and loved by francophones here on the Island and in Lowell.  In fact, I used to do my banking at Jeanne d'Arc Credit Union and two of my children went to Ste. Jeanne d'Arc School in Lowell.

Posted by Sharon Sawyer at 5:02 PM No comments: